God Goes Before You and Is With You 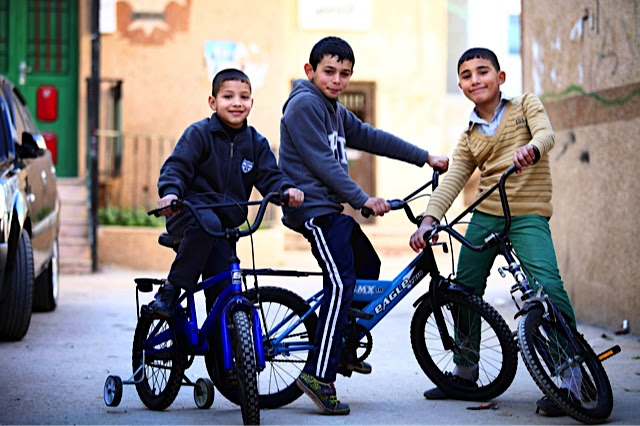 This past week I had the privilege of seeing a long-time friend, Jeff Price, while I was speaking in Denver, Colorado. He served as an elder at Coast Community Church in Huntington Beach, California, where I was a pastor in the late 80’s and early 90’s. Jeff moved his business to Aurora, Colorado, later sold it, and retired. God had new plans for Jeff. He now oversees a refugee ministry in Aurora that he calls the “Refugee Bicycle Ministry.” Let me share with you this wonderful Jesus story.

When Jeff’s pastor was called by the Denver Rescue Mission to visit a refugee family from Africa who lived in the Shadow Tree apartments, he thought of asking Jeff to accompany him. They had a good visit with the family, and as they were descending the stairs from the second floor, Jeff noticed many children and a few bicycles with flat tires in the courtyard. At that moment, he heard in his mind, “Come back, and fix those bicycles for the kids.”

Although the apartment complex was a 15- to 20-minute drive from his house, a day or so later, Jeff returned to the apartments with a bicycle pump, tube patches, and some tools. After setting up shop in the middle of the courtyard, he said, “Okay, God, here I am in the courtyard. What next?” Then one of the refugee children approached him and asked, “What are you doing?” Jeff told him that he was there to fix bicycles and asked if he had one that needed repair. The boy excitedly ran off and returned with his bike, which had a flat tire. Soon another kid with a bike came, and then another and another. As he finished working on the bikes, some of the children asked, “Are you coming back?”

Jeff returned the next few weeks. There seemed to be no end to bikes that needed repair. It began to dawn on him that God was calling him to be a missionary to the nations in that apartment complex. There were families from Somalia, Kenya, India, Nepal, Ghana, Pakistan, Congo, and many other African and Asian countries. God used the bike ministry to open the door to many other opportunities to minister. After a year, the Lord brought another man to help him because there were so many needs to be met with the families. Before long, others wanted to help.

In the early days of the ministry, Jeff called it the “just show up” ministry. People from Jeff’s church would just show up, meet the children and their families, and listen to see what needs surfaced. Then they would ask Jesus to meet those needs. For instance, a woman told them she needed a laptop computer for her work. Another mother in the course of a conversation mentioned that her children were sleeping on the floor. So Jeff and company would pray, “Lord, this is Your ministry. We need a computer and two beds for the children.” Within the week, Jeff was approached by people who just happened to have an extra computer and a couple of beds that they wanted to pass along.

Over the past three years, the ministry has expanded to three apartment complexes. Jeff felt led to go into a nearby complex to reach out with the bike ministry. When he talked with the manager, who happened to be a Christian, she said she would be thrilled if they would minister in the apartments. Jeff and the other volunteers are Jesus’ ambassadors, helping refugees fill out job applications, getting furniture for their apartments, providing clothes for the families, giving bikes to children and adults who need them, and providing food for hungry families. They have started ESL classes, provided vacation Bible schools for the children, and helped the families in many other practical ways.

Jeff says, “Where God guides, God provides.” They have been amazed at how God continues to open doors and provide for the ministry. When the police impound bikes in the area, they give them to the owner of a bicycle shop who heard about the bike ministry. He now recycles the bikes through Jeff’s ministry to supply the refugees with more “wheels.” He also generously supplies them with everything they need to fix the bikes. Recently, someone offered them a building to store all the bikes that have been donated and the tools and space to set up a repair shop.

We love in Jesus’ name

One day one of the children asked Jeff, “Why are you here?” He replied, “I am a follower of Jesus Christ, and He tells us to love our neighbors, and you are my neighbor.” A few days later, he overheard another child ask that kid, “What are these guys doing here?” Jeff’s new friend told his friend, “He believes in Jesus Christ, and He tells him to love his neighbors, and we’re his neighbors!”

Jesus now has many names among the refugees in those apartments in Aurora. One name is Jeff Price and the other names are those who volunteer their time and skills to extend Jesus’ love to people who have never heard of Him nor heard of such a love. Jeff asked one of the children, “Aren’t you a Muslim? Wouldn’t you like to go back to your country?” He replied, “Yes, we are Muslim, but they kill people in our country.” They are so happy to be here in the United States and to be in the apartments where their neighbors are Jesus-followers.

One of the men in the apartments that Jeff has befriended had an assignment in a class to make a documentary, so he chose to feature the refugee ministry in his apartments. You can watch it at here.

God has opened many doors for me to go to the nations with the gospel and give what God has given me to give. I’ve also found that where He guides, He provides. Many of you have been channels of His provision to Elijah Ministries, and I’m honored to take the gospel around the world in your name. However, more and more, God seems to be bringing the nations to our doorsteps. Maybe there’s a place that Jesus wants you to “just show up.” Are there some neighbors that Jesus wants to reach through you?

For my friends in the Denver area, Jeff told me he could use more help. You can contact him at jeff@jeffgprice.com. The needs are many among our neighbors who have come from other countries. Maybe there’s a similar Jesus story waiting to be written in your life. No doubt as in Jeff’s case, God is going before us and laying out a course for us to run. Let’s be encouraged by Jeff’s story to be alert and open to God’s guidance. We can be courageous because God is with us.