The Birth of Jesus

“Approximately 200 years after Jesus’ birth, an anonymous Christian wrote an expanded account of the birth of Jesus called The Protevangelium of James. James had nothing to do with it. The author was not a Jew and did not understand the Palestinian geography or Jewish tradition. In that period many wrote books claiming famous people as the authors.” The book is full of details created in the author’s imagination. For example, the author described the road between Jerusalem and Bethlehem as a desert, which in fact was rich farmland. Mary has the baby in a cave by herself before they get to Bethlehem as Joseph runs on to get a midwife in Bethlehem. When Joseph returns, a dark cloud hangs over the cave, and then a bright light overshadows the cave (1). (Jesus Through Middle Eastern Eyes: Cultural Studies in the Gospels, Kenneth E. Bailey, ebook, pg. 26)

The “novel” is the first to plant the false idea that Jesus was born on the night of Joseph’s and Mary’s arrival in Bethlehem. If you still have that idea in your mind, then although you may not realize it, you have been influenced by The Protevangelium of James. You’ll see the problem when you check out the historical context in Luke 2:6-7.

And it came about that while they were there, the days were completed for her to give birth. And she gave birth to her first-born son; and she wrapped Him in cloths, and laid Him in a manger, because there was no room for them in the inn. Luke 2:6-7

Did you notice that Luke mentioned that Joseph and Mary had already been in Bethlehem before the days were completed of the pregnancy? Contrary to popular belief, Joseph and Mary had plenty of time to find a place to stay and have the baby in Bethlehem. What would a loving, thoughtful husband do if he knew his wife was pregnant, knew when the baby was due (within a month), knew he had a 4-5 day journey, knew many family members who would be ready to receive them when they arrived, and knew most of all that he was caring for the Son of God? Wouldn’t he plan to be there at least a month ahead of time so the journey wouldn’t be too difficult for his wife and everything could be prepared for the baby’s arrival?

Bailey, in his very enlightening book, Jesus Through Middle Eastern Eyes: Cultural Studies in the Gospels, provides historical and cultural information that helps us better understand and rethink what we’ve heard about the first Christmas. I thought it would be helpful and interesting to share some of his insights about the middle eastern culture into which Jesus was born, correct some of the fallacies of tradition, and grow a deeper love and appreciation for our heavenly Father’s care for His Son.

Joseph and Mary probably had many places to stay in Bethlehem

The expecting couple were not strangers arriving to a bustling city with packed hotels. It is quite doubtful that Joseph considered renting a room at the local Bethlehem Inn. Luke records, “And Joseph also went up from Galilee, from the city of Nazareth, to Judea, to the city of David, which is called Bethlehem, because he was of the house and family of David” (Luke 2:4). In order not to be misunderstood, Luke didn’t only say Joseph was from the house of David, but that he was from the family, the lineage, of David. Luke identified “the city of David” as Bethlehem, indicating his attentiveness to readers who were not local. Joseph traveled to family! It would be unthinkable, absolutely shameful, that none of his family would take him and Mary into their homes—especially in her condition. Furthermore, it would have been an insult of the highest degree to the family had Joseph not sought help in one of their homes. Additionally, Mary’s relatives would have been angered had Joseph failed to turn to them since they were probably within 5 miles of Bethlehem. We can be almost certain that Joseph and Mary had many options when they arrived in Bethlehem, and it is seriously doubted that a cave was one of them since they had been in Bethlehem for days or weeks.

Jesus was born in a typical Palestinian house

Only the wealthy had barns in Jesus’ day (Luke 12:13-21). The average city-dweller in Bethlehem lived in a two-room structure. Bailey described houses of the period. One room, exclusively for guests, was either attached on the end of the house or on the roof, like the “prophet’s chamber” in the story of Elijah from 1 Kings 17:19. The main room was the family room where the entire family cooked, ate, slept, and lived. The end of the room, next to the door, was either a few feet lower than the rest of the floor or blocked off with heavy timbers. The family’s livestock would be driven into this designated area each evening. Then in the early morning, they would be taken out and tied up in the courtyard or the street. In Luke 19:30, we find an example of this when Jesus told His disciples, “Go into the village opposite you, in which as you enter you will find a colt tied, on which no one yet has ever sat; untie it, and bring it here.” During the day, the stall would be swept and cleaned. An owner wants his animals in the house at night because they provide heat in the winter and are protected from theft (2). 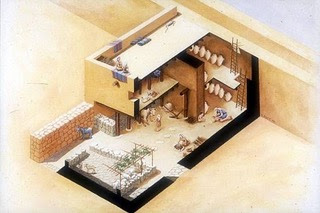 These pictures give a good idea of the kind of house in which Jesus was born. You’ll notice the mangers in the figure on the left in the lower part of the house near the stall from which the animals could eat. It was in such a manger that Jesus was laid after His birth. More than likely, the home in which they stayed was the very same house in which the magi found them. Matthew recounted the magi’s visit. “After coming into the house they saw the Child with Mary His mother” (Matthew 2:11).

The guest room was full

But someone might ask, “But what about the inn? Because Luke wrote in 2:7, ‘she wrapped Him in cloths, and laid Him in a manger, because there was no room for them in the inn.’” As you see in the figure above, the guest room comes from a Greek word, kataluo (katalyma in figure above). Kataluo is translated inn by the NASB, KJV, NKJV, and ASV. Let’s contrast this with another instance where inn is the English word of choice by the translators. Remember the good Samaritan who took the wounded man whom he found on the road to an inn? The Greek word in Luke 10:34 is the word, pandocheion, which comes from two words, pan meaning “all” and dechomai meaning “receive”, thus a place that receives all. This word was so widely known across the Middle East that over the centuries, in many languages it came to mean a commercial inn. However, the context of the birth of Jesus points more clearly in the direction of the term guest room. “A kataluma simply means “a place to stay, which refers to many types of shelters. The three options for this story are inn (the English translation tradition), house (the Arabic biblical tradition of more than 1000 years), and guest room (Luke’s choice).” (3) Luke used this same choice in 22:11 where Jesus told His disciples about a man they would meet. “And you shall say to the owner of the house, ‘The Teacher says to you, “Where is the guest room (kataluma) in which I may eat the Passover with My disciples?’”

Since it is highly unlikely that Joseph would try to settle his wife in an inn while snubbing his extended family, we can be fairly certain that it was the guest room of a family member that was occupied. When Joseph and Mary arrived at the home of their intended hosts, they were offered space with the family in the family room, adjacent to the stall for the animals. After Jesus’ birth, the manger, which was used to feed the animals, was an adequate cradle for the swaddled baby.

“This will be a sign for you: you will find a baby wrapped in cloths and lying in a manger” (Luke 2:12). What an encouraging word to the shepherds! “The baby which has been born in Bethlehem, and who is Christ the Lord, you will find in a house like yours—a house with a manger like yours. It will be a sign for you.” They don’t have to be afraid that they will not be accepted when they find the baby. How excited they must have been to run “see this thing that has happened which the Lord has made known to us.”

Bailey helps us understand how incredible the news of Jesus’ birth was to the shepherds, who were in the peasant class of society. Knowing the middle eastern honor/shame culture, he surmises that Jesus was found in the comfort and hospitality of a home like their own. In the Middle East, had the shepherds found the new family in a cave, they would have felt obligated to immediately take them into one of their homes on behalf of the community and family. Bailey suggests that we can be assured that the shepherds found Jesus well taken care of in the home of a family member or friend.

God came to be with us

Immanuel, God with us. When the Son of God was born, from the beginning, from His first breath, He was with us. He wasn’t isolated in a cave with a lonely mother awaiting the return of her husband with an unknown midwife. Although the menfolk were surely outside, as soon as He was born and all were made presentable, He was surrounded by family. Shortly after, the peasant shepherds arrived, and there Jesus was, God with them—and with us. That’s what God’s love looks like: being with someone to help them, to honor them, and to deliver them out of their sin and shame.

Everything about this story shows honor and love. Joseph honored and loved his wife and family members by finding and selecting a place for the birth. The host family honored and loved Joseph. They also brought honor to their own house and community by taking them in. The shepherds honored God by seeking out the baby Jesus. We also can honor God as we seek to live to love with Jesus by being with whoever He puts in our paths for the glory of God. That’s the purpose for which we were born—again!

I hope you’ll check out the resources at spiritofelijah.com and livetolovewithjesus.com as you consider Christmas gifts this year. There are many resources that will be an encouragement to those you love. Also, if you have found Elijah Ministries and the Live to Love Blog to be helpful and an encouragement to you, would you consider supporting the ministry through a one-time gift or becoming a regular member of the EM support team? We are grateful to be able to serve the Lord through EM and are honored and grateful for those who encourage us through prayer and giving.

May you and yours have a Christmas season that is blessed with the presence and love of Jesus Christ.

Click here to listen to the blog on SoundCloud.